The river had dropped 100 cubic feet per second seemingly overnight, changing from a pumping heavy metal beat to a slow acoustic tune. Heavy rain two days prior had brought significant sediment into the river from nearby creeks, coloring the water and raising the flows. The water had just begun to drop, filtering out the sediment. From the road, the water was an array of bronze shades. The shallow riffles and soft side pockets in the rapids glittered amber like rays of sunlight touched it. Deep slow pools and troughs were marked by a dark coffee color. Drab gray skies held the cold air in the valley, although the weather report had promised sunshine and 60 degrees…

The river had dropped 100 cubic feet per second seemingly overnight, changing from a pumping heavy metal beat to a slow acoustic tune. Heavy rain two days prior had brought significant sediment into the river from nearby creeks, coloring the water and raising the flows. The water had just begun to drop, filtering out the sediment. From the road, the water was an array of bronze shades. The shallow riffles and soft side pockets in the rapids glittered amber like rays of sunlight touched it. Deep slow pools and troughs were marked by a dark coffee color. Drab gray skies held the cold air in the valley, although the weather report had promised sunshine and 60 degrees. It was a fifteen mile float to the take out, about five miles that day and the rest the next. My dad, Tony Caniglia, had run shuttle while I packed up the boat.

The back of the raft, a bright orange Super Puma referred to as the Bronco, overflowed with sleeping bags, dry bags, and neon-colored pako pads. Blue dry bags, bearing the name “Blitz” in white spray paint, were piled up to the top of the oar seat, then out onto the sides of the boat to minimize wind resistance. The floor between the oar seat and the cooler, the seat for the front of the boat, was elevated by firewood wrapped in a blue tarp. Spare rods jutted out behind like flag poles. Packing the small raft felt chaotic but, standing back, it looked fairly symmetrical and organized.

The parking lot was only about half full but no boats were in sight, everyone had launched early that morning. The water was alive with midges seemingly materializing out of thin air in every direction as we drifted away from the boat ramp. The air was humming with the bugs, crawling under your glasses and flying up your nose. However, we were on the water chasing a different bug – Ephemerella Subvaria, commonly called Red Quills, which are big mayflies with long rust colored bodies and oversized gray wings. A size 14 Rusty Spinner, possibly a size too small to match the hatch, starred down the barrel of my rod, jutting out from the emerald green blank with oversized hackle wings and maroon peacock quill body. On a second rod, a large hopper suspended a heavily weighted hare’s ear nymph below. Some fish that couldn’t wait for the real show were already bubbling under the surface for emerging midges.

Before leaving the first pool, two healthy rainbows had readily taken the nymph and a few others were missed on the hopper. About an hour after the occasional nymph takes, the first Red Quill appeared – then another and another and another, like a school of minnows. They are clumsy flyers but somehow stay in a synchronized pattern, bobbing up and down together and bumping into one another. I quickly paddled towards the tailout of the pool, My dad fired a cast just downstream of the boat above the rapids. The line rolled out behind, then in front, and softly dropped the spinner a foot or so off the bank. Briefly masked by shadow then, in slow motion, the gold body flashed and breached the surface to engulf the fly in a huge slurp or water. It was a 17 inch brown, gold bodied with black spots. 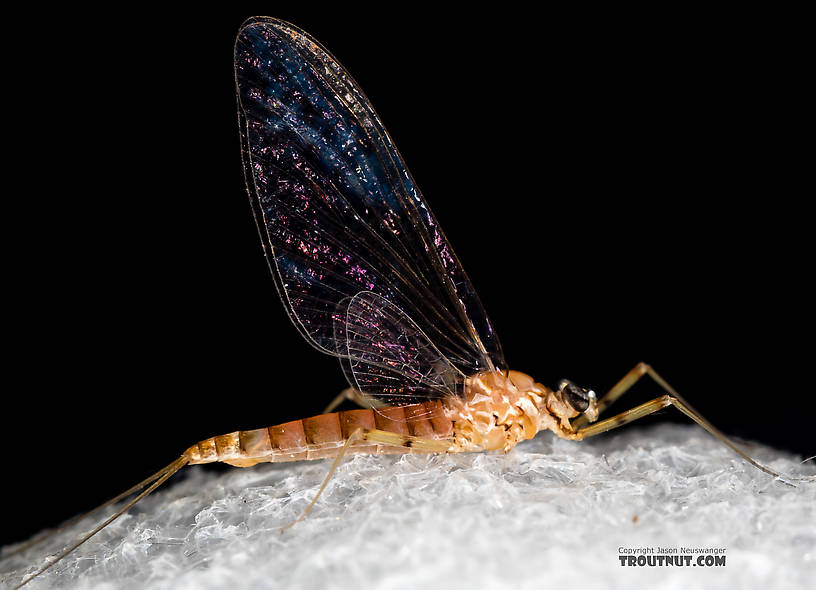 With only a few more hours of daylight and quite a bit further to the campsite, we pushed through the pools to get the faster water. Browns had keyed in on the Red Quill spinners and eagerly launched themselves out of pocket water in the rapids to get the protein-rich morsels. After what felt like hour of switching back and forth for the “every cast” catch, a light rain had decided our retreat downstream to the campsite. The campsite was a small island between two channels in the river, about 30 yards long and 20 yards wide with thick willows covering most of the land. Years of use left a large area clear of vegetation aside from three trees arranged in a triangle and a firepit in the center. Red cliffs on one side of the river arose out of sight beneath the shelter of the canopy.

We rose early and piled soaked tents, sleeping bags, dry bags, and the cooler back into the boat. The river had risen only slightly from the rain overnight and hadn’t colored drastically. In the dull morning light, I had rigged an articulated sculpin streamer pattern, pushing six inches long, on my rod. I pushed the boat off the bank and hopped in in one swift motion. It was a clear windless morning, the sun had not even risen over the valley walls. 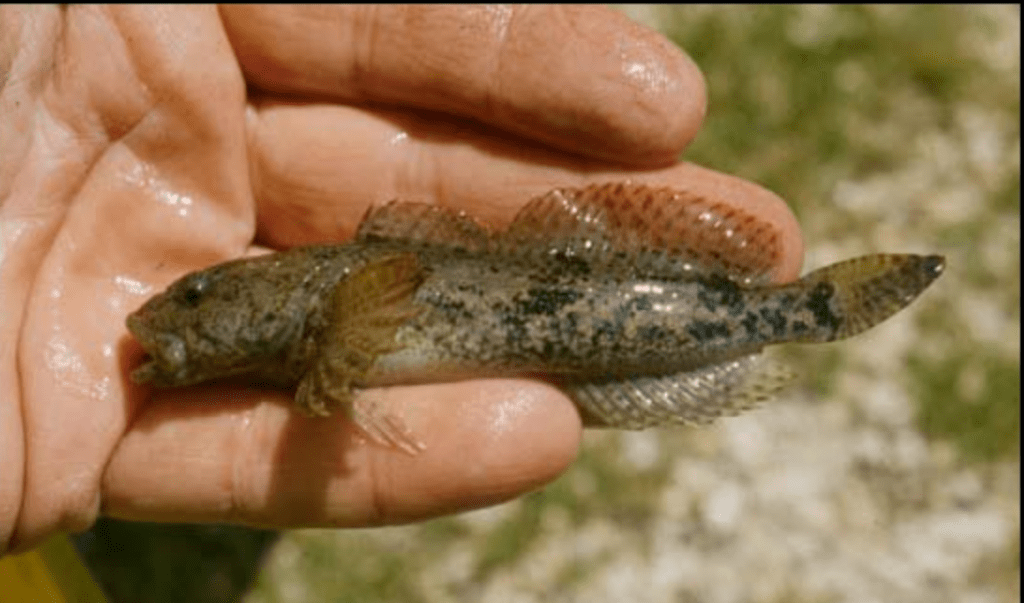 Two pulls on the oars and we were in the current. My dad worked the oars with the boat facing downstream, pulling backwards to slow down. I worked the banks intently, each strip of the line carefully measured to move the streamer in an intended motion. Smacking the water with the fly, a few quick strips away from the bank, then slowing down with short strips and long pauses. As the fly dove during pauses, the tail of the fly fluttered madly. The river below the campsite had a long riffle run then a right hand turn into a small set of rapids. Extreme river flows in the past centuries had carved an array of pockets and bumps into the red cliff, making the rock appear layered. The bend had a strong but slow current pushing boats along the outside bank.

Every boat I had watched through this section casts to the outside, with countless small pockets and even a downed tree providing structure. On the inside of the corner, sand from the bank met with gravel in the river making a parallel color change. I rolled the fly out behind, loading the rod, and sent it zipping through the air towards the inside. Strip, pause, strip, pause. The silhouette slicked down as it moved and splayed out during the pause, tail kicking out erratically. Just as the fly crossed over the gravel line, there was a sudden pull in the opposite direction. It was a violent, even frightening, bite that was meant to kill the bait fish. I strip-set two or three times until I could feel the fish fighting. The fish came to the surface, thrashing back and forth to get the hook loosened. I eased up, let the fish settle a bit and dive back down the water column. I felt a few bumps on the rod from the fish shaking its head as I muscled him up and into the net.

The back of the brown trout was nearly black, gradually blending into a brilliant gold on the belly – it was a twenty-inch gold bar. I could not tell where the fish was looking because of its beady black eyes. Its tail swam back and forth as if it was still on the water. The jaw opened and closed, its kype fitting into its top jaw like a piece of a puzzle. Upon touching the water, it shot out of my hand, churning the water like a speed boat. Big fish like this often cause a state of focus so deep that you become oblivious to any background activity. In my state of focus fighting the fish, my dad had pulled over, grinning at me because it was clearly my turn to row after a fish like that. 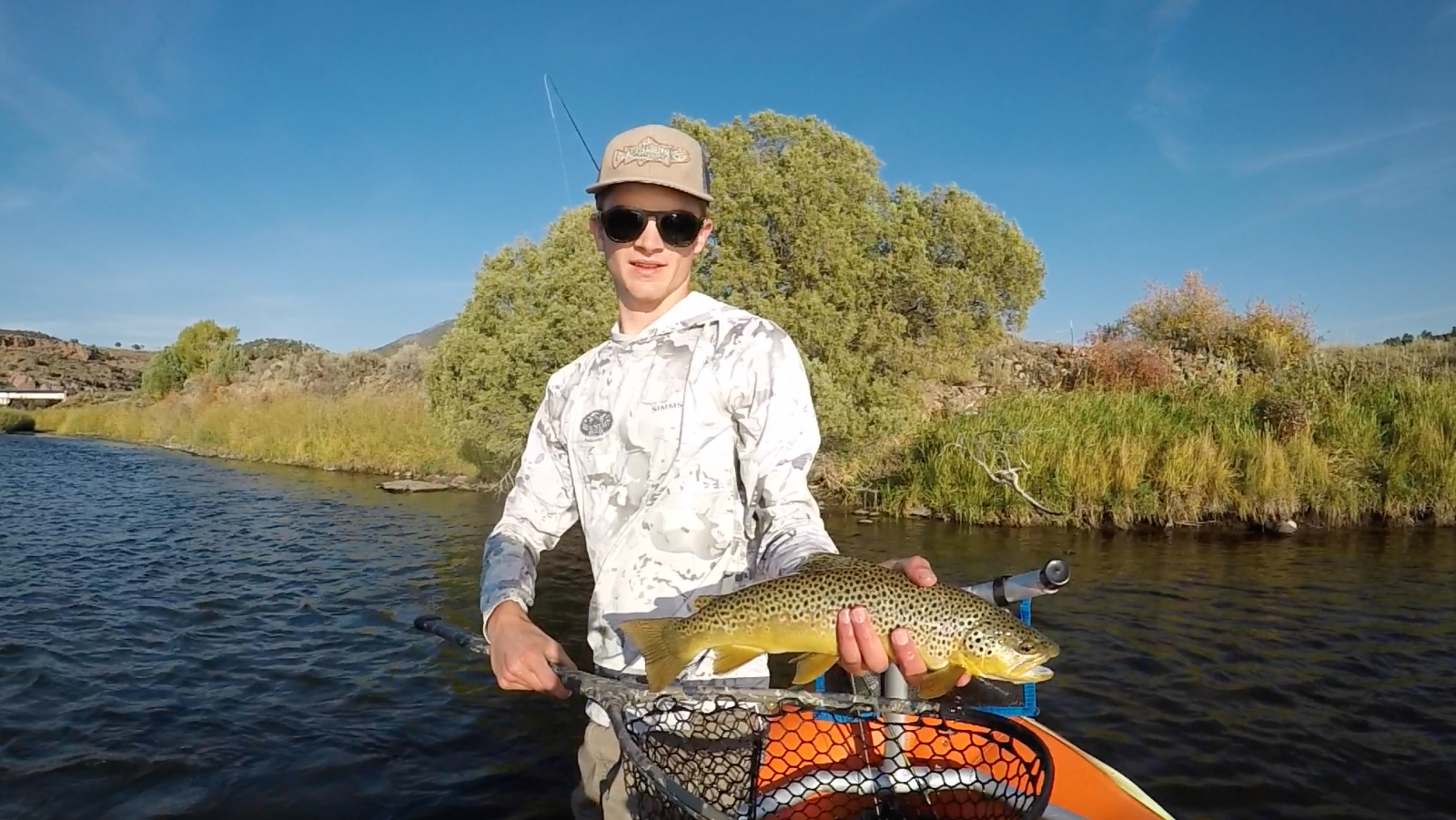 As the sun faded deeper in the sky, we began cherry picking spots and pushing through the rest. We paddled through a few pools and met another healthy male brown. After two more small rainbows, I retreated back to the oars. After about a half hour of paddling, we slowed to fish a weed bed. I switched to the streamer we had used earlier in the day. He slowly jigged the fly up and down slowly along the weeds. As it was falling, the line instantly went tight, the addicting eat that draws so many to streamer fishing. The line cut through the water, delayed behind the fish by the surface tension. After zipping back and forth a few times, I grabbed the fish by the tail and hoisted it up. It was a gilded crown, with shining red rubies as spots. The fish had put us just above the last rapid before the take out. We were both hooting and hollering as we slid sideways through the rapids, celebrating as one would after a good game of golf or baseball – arms raised, laughing like drunks, and already stretching the stories that had only just happened. As we drove back up the dusty wash-board road to the put-in, I studied the depth changes one last time before the next float. I looked back at the Bronco glaring out from the curtain of red dust billowing behind the trailer and saw flashes of gold, the color of a brown trout rolling just under the surface before it slips away.