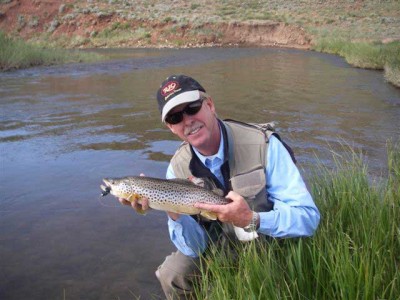 Jackson has been fly fishing in Colorado for 50 years, guiding for 30 years and since 1971 has fished in Colorado an average of more than 100 days a year.  After growing up near Beacon, New York, Jackson earned a business degree from Denver University before moving to Breckenridge and starting the first fly-fishing guide service in the area in 1977.  He opened The Mountain Angler in 1985 offering top-quality fly fishing gear, guide service and information.

In addition to fishing throughout Colorado, Jackson has “wet his line” in the steelhead rivers of Washington & Oregon as well as in Belize, Mexico, the Bahamas, New Zealand and Christmas Island.  He is known for his slide-shows and his presentations on fishing throughout the Western Hemisphere have fascinated fly fishing groups all around the country.  He has also written articles for several Colorado publications, been a consultant for articles in national fly-fishing magazines, and written his own “No Nonsense Guide to Fly Fishing in Colorado”.