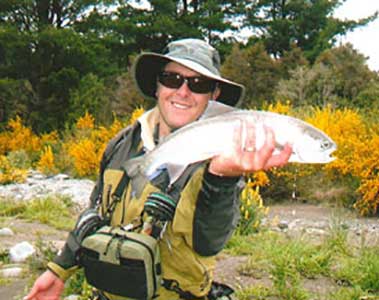 Andy was born in Mobile, Alabama and raised in New Jersey. Chasing after large mouth bass was his adolescence. He lived in Boston Mass. earning a Bachelors Degree at Boston University. Summers were spent in Ocean City, New Jersey working on a sport fisher pursuing tuna, marlin, and shark, amongst other blue water species. Moving to Summit County, Colorado in 1992 found Andy searching out powder stashes in the winter and trout in the summer. He started guiding in 1999 and has kept tight lines and happy guests ever since. Andy has fly fished in many of the lower 48 as well as in Mexico and New Zealand. He married a Kiwi and has a young daughter who enjoys visiting her grandmother in New Zealand, and Gramma just so happens to live close to some good water. Besides his family, trout and powder are held dearest.